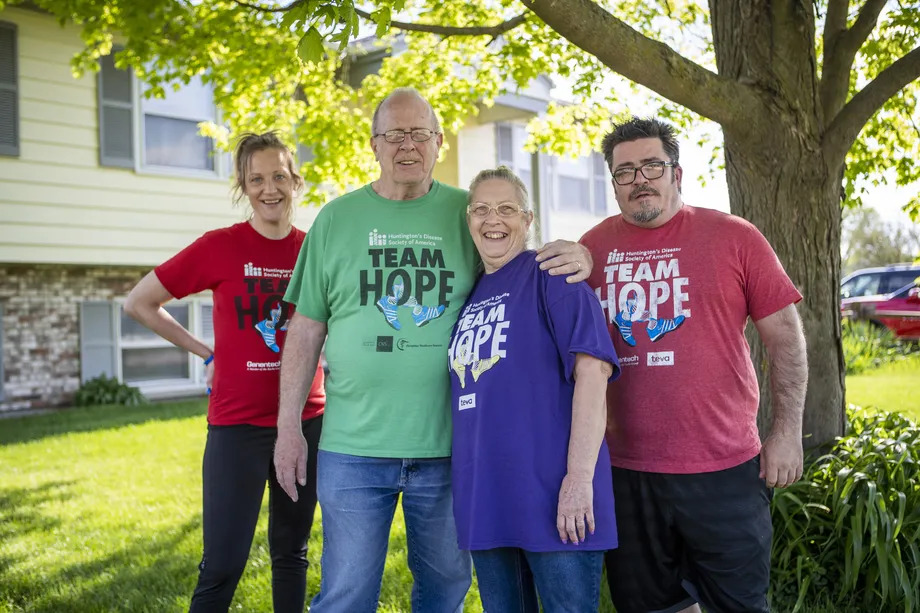 It’s hard to keep track of how many loved ones Dave and Susie Hodgson have lost to Huntington’s disease.

The Hodgsons, who live in Somoanuk, south of DeKalb, each has buried a spouse, both of their mothers-in-law, two sons from their first marriages and two siblings of Dave Hodgson’s first wife.

And the deadly legacy of Huntington’s — a brain disease with no cure that is passed from one generation to the next through a defective gene — continues.

One of Dave Hodgson’s daughters has the disease. Two others are at risk for inheriting Huntington’s. And it’s possible some of their three grandchildren, who range from 10 to 26 years old, could be diagnosed at some point.

That’s why the couple will be out on the Naperville Riverwalk Sunday morning to participate in the 17th annual two-mile Team Hope Walk. Since the Hodgsons started the walk in 2005, they’ve raised $1.2 million for the Huntington’s Disease Society of America.

Dave Hodgson, 74, said that although he and Susie knew what to expect “going down this path” with their first spouses, it’s still hard having to do it again with their children.

His first wife Paula was working as a nurse when she was diagnosed in 1986. By the time she died 18 years later, she had been needing round-the-clock care, some of it provided by Susie, a nurse who met the couple through an online support group for Huntington families after caring nearly a decade for her husband Bud Sr., who died in 1999.

“It devastates not only the immediate family but the extended family and the community at large,” said Susie Hodgson, 68. “It will never be over for us.”

There are over 200,000 families at risk in the United States — about 1,500 in Illinois — and roughly 41,000 Americans have been diagnosed with Huntington’s. Every child of a parent with Huntington’s has a 50/50 chance of inheriting the faulty gene.

The disease causes deterioration in physical, mental and emotional abilities, with most people showing symptoms between 30 and 50 years old.

The symptoms are sometimes described as having ALS, Parkinson’s and Alzheimer’s all at once. But Huntington’s is a less complicated condition, said Dr. Danny Bega, an associate professor of neurology and director of the Huntington Disease Society of America Center for Excellence at Northwestern University’s Feinberg School of Medicine.

“We don’t have any drugs or treatments to slow it down or stop the disease or stop people from passing it on,” Bega said. “It’s frustrating.”

Unlike other brain diseases, though, there’s a test that can easily determine whether someone has Huntington’s. Yet many people with a family history of the disease — 70% to 85% — don’t get tested, Bega said.

People worry about getting or keeping their health insurance as well as discrimination at work, though the federal Genetic Information Nondiscrimination Act offers some protections.

“We know for a fact they’ll be denied long-term care insurance,” Bega said.

One argument Bega hears against testing: “What are you going to do about it? If you’re not going to treat me, then why do I want to know?”

“Some people realize it’s better for them not to know,” he said. “You can have the test, be positive and not show symptoms for 30 or 40 years.”

Others suffer more anxiety not knowing, according to Bega, noting that the average onset is at 40. Also, the information can help some make decisions about whether or how to have a family.

The Hodgsons’ children are typical in that some have chosen to be tested, and others don’t want to know if they carry the deadly gene.

There also can be some guilt involved. One of his adult sons tested positive, while one tested negative and was afraid to tell his brother. “Why am I the lucky one?” he wondered.

There’s also the decision about whether and when to tell the next generation. The Hodgsons recently talked with two of their grandchildren whose grandmother died of Huntington’s; their mother has the disease.